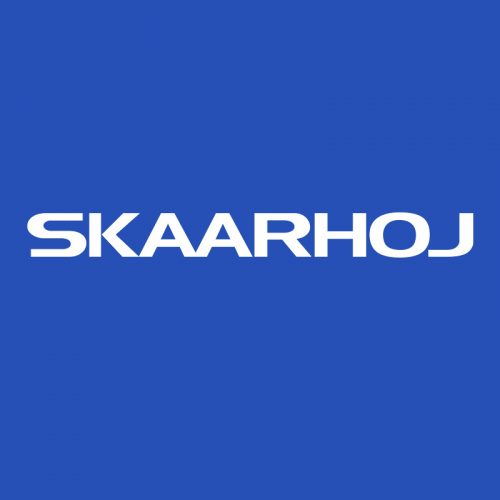 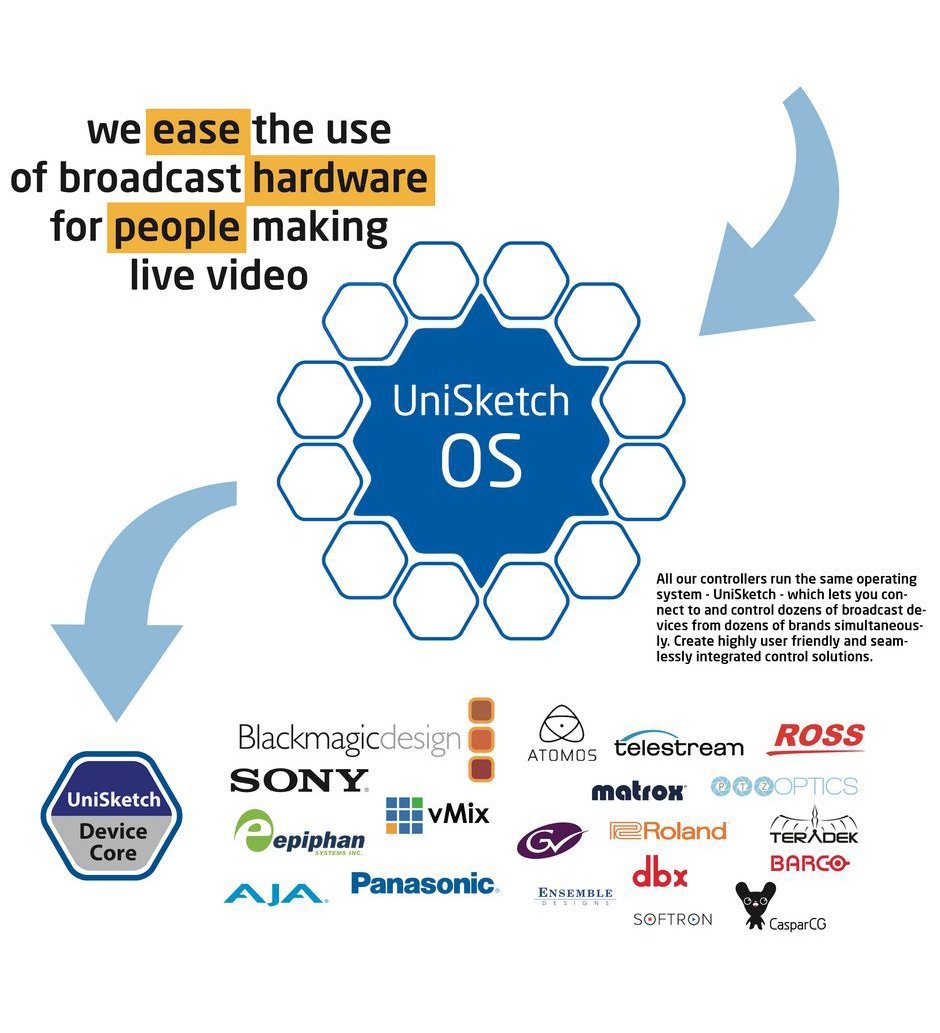 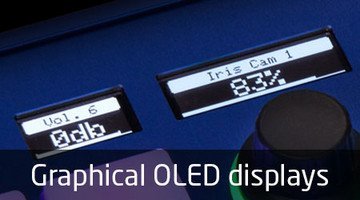 Our graphical OLED displays support buttons, knobs and faders with dynamic labels. The combine large, bold labels with unprecedented levels of detail using titles, icons and scales to enrich the main content. They automatically draw information from the connected devices or you can type in your own labels or upload graphics. Found everywhere in many sizes and dimensions on SKAARHOJ controllers. 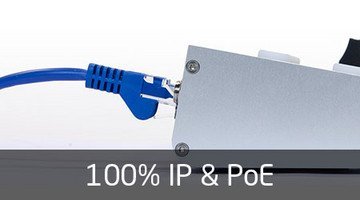 One cable carries power and the signals for as many devices as you need to control. Your switcher, video router, recording deck and even your cameras. The future is IP, while legacy serial systems can typically be supported by end-point converters, which is often more convenient anyway. With Power over Ethernet (IEEE802.3af), Skaarhoj un-clutters your desk and your racks. 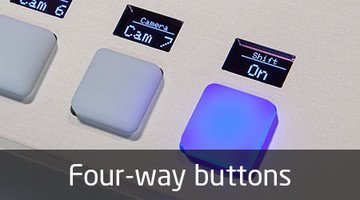 Custom moulded, tactile, elastomer buttons, that detect whether a button is pressed on the left, right, lower or upper edge. This allows a single button to adjust multiple settings and the values of those settings simply from pressing opposing edges. It could even work as a simple joystick. Or it can be just a simple button. Innovative, insanely flexible and perfect for a universal controller. 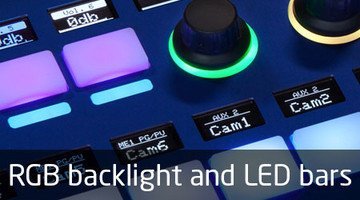 The RGB back-light and LED bars are not just visually impressive and soothing. They’re also super practical to colour code sections based on their assigned function. This provides the operator with instinctive clues, which can be the critical difference between success and failure. Colours can be assigned manually and are dim-able. 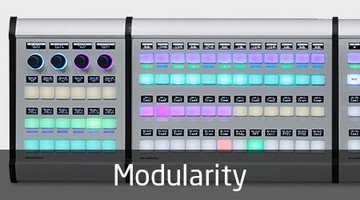 Modularity is taken to a new level by SKAARHOJ. Individual controllers can snap together magnetically and electronically, working like one, large, seamless surface. Build your desktop control surface to fit your particular circumstance in a matter of seconds. Modules snaps together, can be reorganized on the fly, distributed with cables or just stuck together in one impressive trunk.

Audio control is not always a separate concern to the video producer. SKAARHOJ controllers generally give you access to audio adjustments and monitoring through encoders and four-way buttons and by means of multi level LED bars. If that doesn’t cut it, Wave Board is to the rescue with eight motorised faders, full colour LED bars, a four button control section per channel and global function keys to multiply it all at your will. 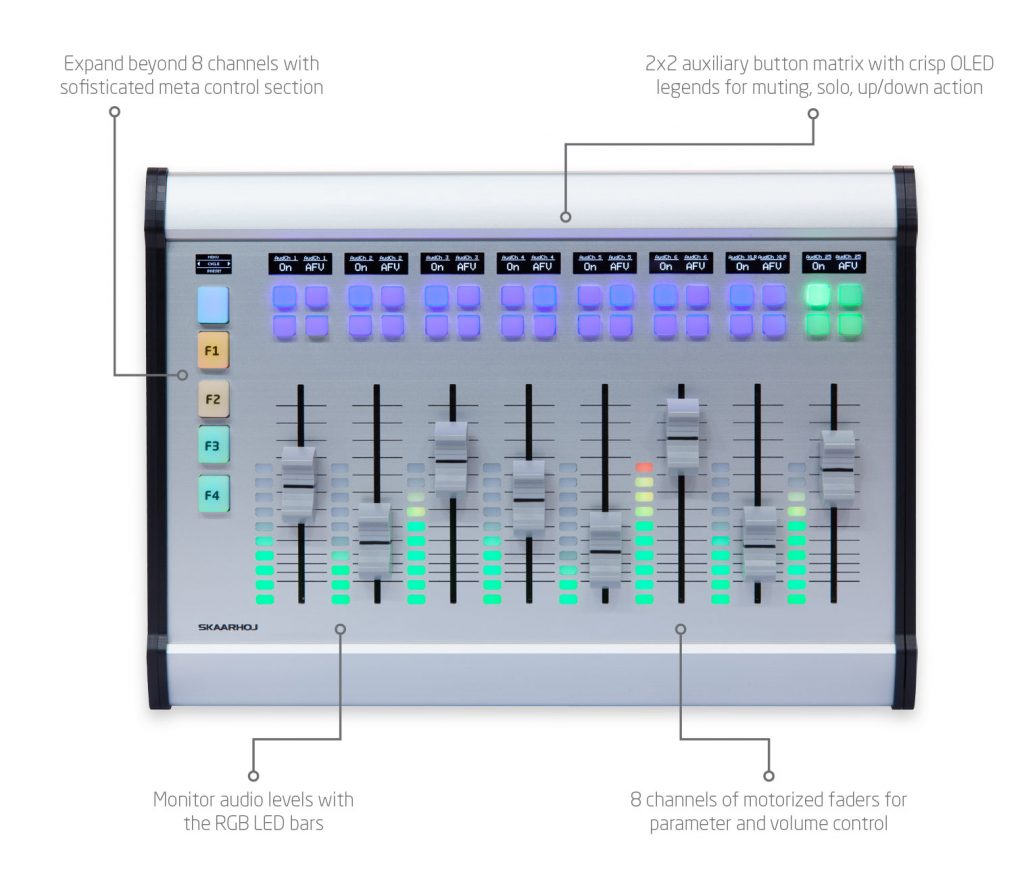 A replay controller with speed control and IP connectivity. The XC8 interfaces with modern replay solutions such as m:replay from Softron and the built-in engine in vMix. 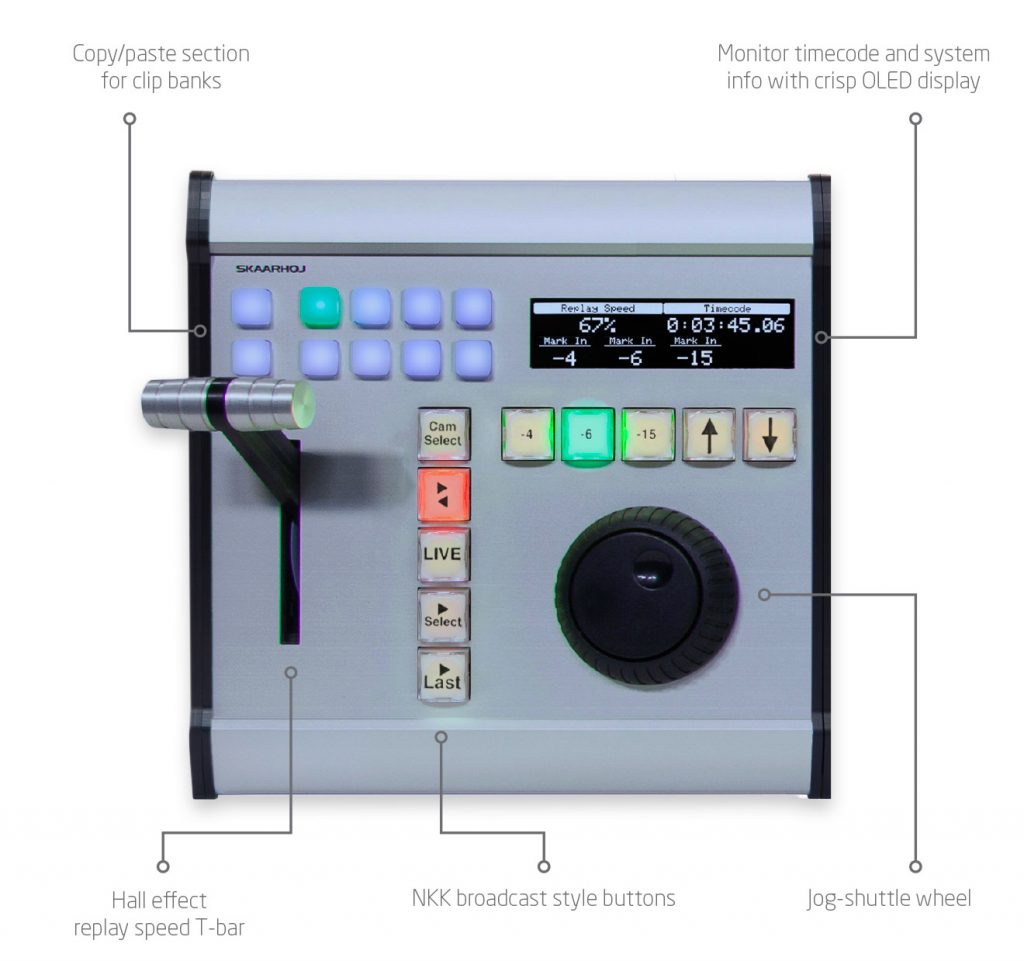 Build your desktop control surface to fit your particular circumstance in a matter of seconds. Modules snaps together, can be re-organised on the fly, distributed with cables or just stuck together in one impressive trunk. Like all SKAARHOJ controllers the XC Series is running UniSketch OS and so they will control any current and future broadcast devices we support. Controllers in the XC Series are delivered as a Master or a Module. The rightmost controller must be a Master. A Master controller can be connected to another master controller and act as a module. When detached it will act as an independent Master.

The MC Series is the “pocket version” of the XC line-up. Built for space sensitive applications they fit perfectly in small OB-vans and fly-away kits, but are still powerfully modular in the exact same way the XC line-up is. Take an MC3 out for a night with a four camera shoot and snap on an MC4 module the next day to add control for more inputs, trigger macros, etc. With crisp graphical OLED legends for each button you will always know what that button does.

These controllers focus on a single, narrowed down task which makes them perfect as interfaces for untrained operators, as a remote controller on your camera rig or a small monitor device squeezed into a crack between other bulky devices in your OB van. 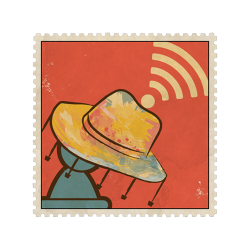 I am  always looking to connect with creative industry professionals who share my passion for the technologies and processes of media creation. If you are keen for a coffee and a chat about what you are seeing going on around you – some new technology or policy; its impact and implications – please feel free to reach out and connect.

Enquire about Skaarhoj Control Solutions Below

Please rest assured that your details will never be shared with anyone else without your permission. Your privacy is important to Bruce. That’s why he has a Privacy Policy

NB: Due to the weakening Australian dollar, pricing is expected to rise across numerous product ranges on Monday 2nd March. Any orders placed prior will be honoured at the current price, regardless of the availability of stock. Dismiss