Designed for Broadcast and Post Production
The innovative design is much better than regular converters as you can rack mount the converter if needed. The front panel feels elegant when placed on a desktop plus it includes buttons and a colour display for video monitoring with audio meters and video standard. The rear panel has Quad Link 12G‑SDI for HD, Ultra HD as well as 8K formats. There is also a down converter for using 8K sources on Ultra HD or HD televisions. You can even convert between 2SI and Square Division all automatically! There’s also AC power, analogue audio HiFi out and a front panel USB connection for use with monitor calibration probes. 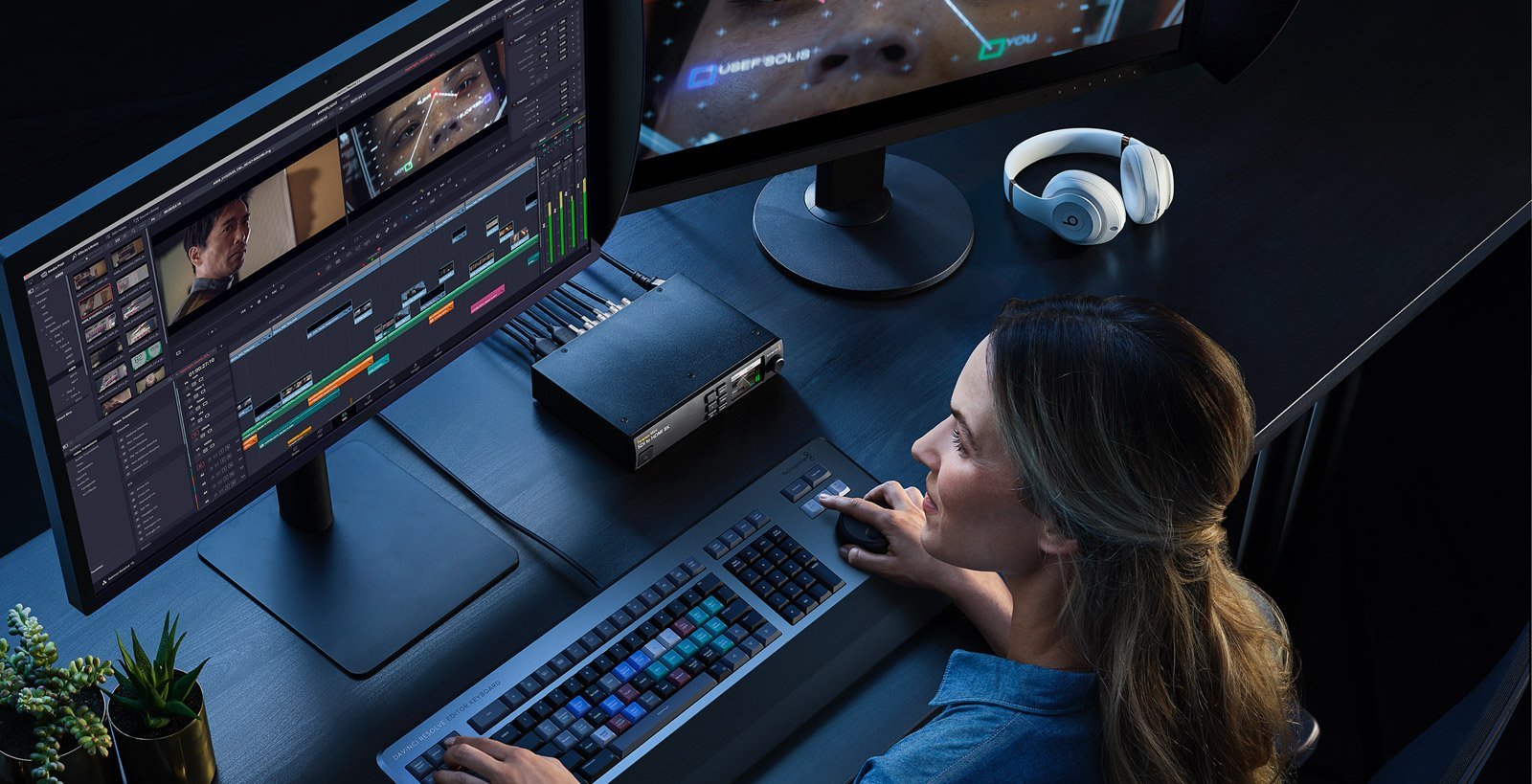 Latest HDR Support
Teranex Mini SDI to DisplayPort 8K has everything for the latest HDR workflows. All that’s required is to connect a DisplayPort display to get HDR SDI monitoring. Static metadata PQ and Hybrid Log Gamma (HLG) formats in the VPID are handled according to the ST2108‑1, ST2084 and the ST425 standards. Teranex Mini SDI to DisplayPort 8K HDR handles ST425 which defines 2 new bits in the VPID to indicate transfer characteristic of SDR, HLG or PQ. Plus the ST2108‑1 standard defines how to transport HDR static or dynamic metadata over SDI. Plus there is support for ST2082‑10 for 12G SDI as well as ST425 for 3G‑SDI sources. Both Rec.2020 and Rec.709 colour spaces are supported and 100% of the DCI‑P3 format.

Real Time Integrated Scopes
Two fully independent on screen scopes are included so compliance with broadcast standards is easy when doing critical high end work. Scopes are overlaid on screen so you can customise position, size and opacity. You can select from a range of scopes, including waveform for displaying luminance levels of your input signal. The vectorscope display allows you to see the intensity of colour at 100% SDI reference levels. You also get RGB and YUV parade displays which are ideal for colour correction and checking for illegal levels. Histogram shows the distribution of white to black detail in your images and highlights or shadows clipping.

Advanced 33 Point 3D LUTS
Teranex Mini SDI to DisplayPort 8K HDR includes the same high quality 33 point 3D LUTs as used in the film industry. 3D LUTs are perfect for recreating the look of old style film stocks, or they can be used to compensate for the colourimetry of the connected display. It’s even possible to calibrate the connected display by connecting a third party USB colour probe and Teranex Mini SDI to DisplayPort 8K HDR will analyse the monitor and generate a 3D LUT to correct for colour differences between displays. Two independent 3D LUTs can be loaded and you can select between them from the front panel. Plus 3D LUTs use standard file formats so you can load LUTs generated by software such as DaVinci Resolve.

Built in Monitor Calibration
It’s always difficult to know if a monitor is the correct colour because every display is slightly different, even between the same model! Teranex Mini SDI to DisplayPort 8K HDR solves this problem as it can use a third party USB probe for automatically aligning your monitor. SpectraCal C6, X‑Rite i1 Display Pro or the Klein K10‑A probes are supported and plug into the front of the converter! Simply start the process in the calibration menu and you’ll get cues to set monitor brightness and contrast before the colour calibration process commences. The converter takes care of all the work and will automatically generate test signals on the monitor during the calibration process!

Automatic DisplayPort Down Conversion
Even though Teranex Mini SDI to DisplayPort 8K HDR features Quad Link 12G‑SDI when working in full resolution 8K, it can also switch to HD, Ultra HD, 2K DCI and 4K DCI formats when required. This means you can use it for a lot more than 8K! When a DisplayPort monitor, television or video projector is connected, Teranex Mini SDI to DisplayPort 8K HDR will communicate with the display via EDID and if the monitor cannot handle the resolution, then it will be automatically down converted for display. This means you can use a HD or Ultra HD display for 8K or you can use a HD display for Ultra HD! This ensures you always get images on your display no matter the SDI standard.

Powerful LCD Menu Control
The front panel LCD provides confidence monitoring with both images and accurate audio level meters. There are menus for all functions and it’s easy to scroll through menus “pages” to find settings that need changing. The 3D LUTs can be enabled just by pressing the 1 or 2 buttons. Calibration is also started via the menus and you simply follow the prompts to calibrate your display. The audio meters can even be switched between VU or PPM ballistics. DisplayPort instant lock can be enabled to ensure the DisplayPort display locks instantly if the input video is interrupted. There are settings for configuring scopes, their on screen location or opacity. You can even view and edit network settings.

Mac and PC Software Included
While changing settings via the on screen menus from the front of the converter is convenient, often you find the converter might be installed in a location that’s difficult to access. In this case, Teranex Mini SDI to DisplayPort 8K HDR features Ethernet for remote access via the internet, or you can use the included software utility for Mac or Windows operating systems. This software even works via USB! The latest Teranex software utility can also update the converters software so you can upgrade to the latest video standards and features. You can even load and save LUTs remotely, as well as select and position the built in scopes.

Be Ready for an 8K Future!
8K is fantastic for digital signage as with a single clip you can drive a single 8K display, 4 separate Ultra HD displays or, via an extra converter, you can even drive 16 HD displays for an extremely exciting video wall display. DaVinci Resolve combined with DeckLink 8K Pro is extremely common in Hollywood film studios. Teranex Mini SDI to DisplayPort 8K HDR is the perfect solution to run large projectors and local colour accurate displays. Teranex Mini SDI to DisplayPort 8K HDR is compatible with a wide range of televisions and monitors. However for the best colour accuracy, monitors are the best option as they have stable image processing and won’t shift colour much after you have performed calibration.