*NB: This is an Ex-Demo unit. 1 of available only at this price. As new condition. Full warranty.

Only 1 left in stock

The accuracy of Magewell timestamp is within 100 ns. Magewell cards can accurately record the time when every frame of image is transmitted to the card and when it is stored in the on-board memory. The first sampling time of the audio frame is also recorded. Multiple Pro Capture cards that simultaneously capture multiple channels can use a common timestamp, so that all video and audio can be synchronised. Users can synchronise multiple capture channels of audio and video on different systems with the help of a network. This function is especially useful when compositing L and R channel of 3D video, 360 degree video and digital video wall display and recording.

The cards can analyse the timecode information (hour, minute, second and frame) in HDMI signal output by Sony/Canon DSLRs. The time code format the card can get is HH: MM: SS: FF. This function can be used to synchronise input signals from different DSLRs.

Software such as Flash Media Live Encoder and Windows Media Encoder do not have overlay function. With Pro Capture Family, users can save the investment in software but also overlap their
logo on the video. If Magewell SDK is used, dynamic video can also be overlaid on the incoming video. All the OSDs are done by hardware, causing 0 CPU usage.

Support Most Video and Audio Standards

Users can capture signals from the output of almost any device, such as high-end video cameras (HD/3G-A SDI), switchers (3G-B SDI) and movie cameras (2K SDI). With the Magewell Pro Capture Family, you will no longer find capturing non-standard signals to be a problem. Users can type in the resolution of non standard VGA to correctly capture the video. Manual adjustment of VGA timing is also possible. In terms of audio, both compressed and uncompressed formats are supported.

Pro Capture cards support NVIDIA GPUDirect and AMD DirectGMA technology. Captured data will be directly transferred from the Magewell video engine to the graphics memory. This process is done solely by the FPGA and GPU; the CPU is not involved.

In low-latency mode, the cards start to process video before data transmission is fully finished. If SDK is used, user’s application can also use the partial completion notification function to process partially transferred video lines before the whole frame is transferred.

This function further reduces the total latency to about 64 video lines. In reality, the capture latency of 1080p60 RGB and YUY2 can be lower than 1 ms. Pro Capture Family is definitely a smart choice for professionals in video conference and live streaming industries.

When users plug in the cable, the card will automatically detect the input signal and link the audio input with the video input. The signal format is also analysed so that users do not need to manually choose the video and audio to capture, nor select the resolution, frame rate, etc.

Multiple Cards on One Computer 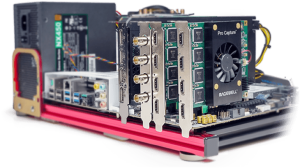 Multiple Magewell Pro Capture cards can be mounted in the same computer and work simultaneously. Users can set the ID number on a rotary switch on each card. The number will appear as part of the card name in Device Manager and video capture software. This function is useful when multiple cards of the same model are installed and the user wants to locate a certain card quickly.

A universal driver is provided for all the cards in the Magewell Pro Capture Family so users do not need to find the driver for each card. This is very convenient and avoids installing the wrong driver. Driver installation is automatic.