The Roland M-5000 console’s internal mix architecture is not fixed and can be freely defined within a range of up to 128 input/output channels/busses. This allows you to essentially “build” a console structure based on the immediate needs of the application. This makes for a console that accommodates high levels of flexibility for precise response to dynamically changing applications and venues.

The Roland M-5000 console’s internal mix architecture is not fixed and can be freely defined within a range of up to 128 input/output channels/busses. This allows you to essentially “build” a console structure based on the immediate needs of the application. This makes for a console that accommodates high levels of flexibility for precise response to dynamically changing applications and venues.

In a rapidly changing world, the ability to adapt is needed to excel – O.H.R.C.A

Open
“Open” refers to the console’s ability to adapt to many different formats of inputs, outputs, and protocols. This not only includes the large variety of Roland digital snakes already in the lineup but also protocols, such as Dante, MADI, Waves SoundGrid, additional REAC ports, and other formats and solutions to come.

High Resolution
“High Resolution” refers firstly to everything running at 96kHz – end to end. All of the Roland Pro A/V peripherals have been 96kHz-capable from the start. From the preamps running high-end 24-bit AD/DA converters to all the carefully selected components and processors, you can be guaranteed pristine sound that is noticeably better.

Configurable Architecture
“Configurable Architecture” is the console’s ability to adapt to the application – allowing you to essentially “build” the mixer you need. How many input channels? How many auxiliary buses, groups, matrices? All of the elements that are typically fixed in most mixers are flexible with OHRCA. How you work with faders, buttons, and knobs and screen are also adaptable to how you are used to working already.

Up to 300 inputs and 296 outputs (and more at 48kHz) are managed in separate patchbays. Any input can be patched to any or multiple outputs, including control* of gain and phantom power, without having to be patched through a mixing channel. OHRCA makes it possible to control an enormous number of input and output channels across multiple protocols and formats.

It starts with a high sampling rate of 96kHz. The discrete circuitry was precisely designed with careful component selection and circuit architecture, separation of analogue and digital sound modules, 72-bit linear summing circuit, and more.

The concept behind the interface is “freedom” – accommodating the individual workflow of the engineer to the greatest extent possible.

Operation centred on a 12” touch screen
Flat design and vector graphics for clear and vivid display of information. The 16 encoders feature rings whose colours change according to their assigned functions to match on-screen parameters. The “touch and turn” mechanism of touching the desired parameter and turning the selected knob achieves fast, intuitive operation.

M-5000: 28 faders in 4 banks – M-5000C: 20 faders in 3 banks
Each of the eight-fader bank sections is equipped with an Isolate function that enables scrolling and layer switching independently or in tandem. Different elements can be assigned to each bank, such as mix channels to one fader section and DCAs to a second fader section. “Jump” to often-used fader scrolling positions using Anchor points. Assign critical channels to the four assignable fixed faders.

Operate the console from a computer on a second or third display. The M-5000 GUI allows multiple windows, and features support for high-resolution displays. The dedicated app supports remote control from an iPad and supports Retina displays for crystal clear graphics. RCS User’s Guide

Engineer’s Monitor – An ideal solution for monitor position
For the monitor engineer, the M-5000 offers an Engineering Monitor function that mirrors each musician’s M-48 enabling the engineer to hear exactly what the musician is hearing. Connect it to one of the two monitor buses and toggle back and forth between musicians using personal mixers and those using traditional bussing. 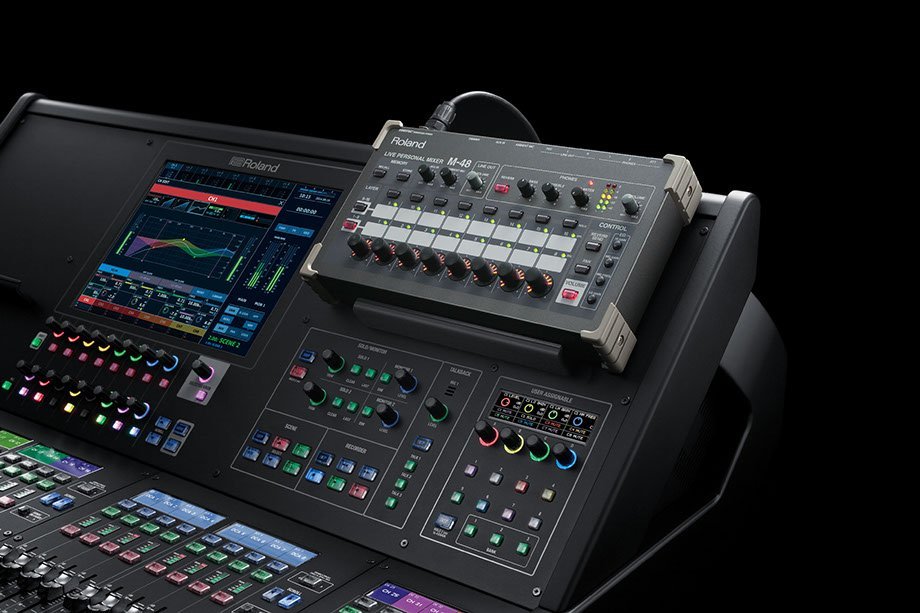 Multi-Channel Playback and Record – 48-channels of playback and recording – no repatching required
When inserted inline between the I/O and the console, not only do you get full control of arming tracks, routing, starting, stopping with the Roland R-1000 48-Track Recorder/Player – you get playback for concerts, soundchecks, training – all the through the identical signal chain as your live sources with no patching required – complete with preamp compensation if necessary.