Click Here for comprehensive training videos and materials to get started and speak to Bruce if you would like to find a training centre near you! DaVinci Resolve 16 features a revolutionary new cut page specifically designed for editors that need to work quickly and on tight deadlines! The cut page isn’t about simplification, it’s about building a whole new powerful editing interface with professional tools that help you work faster. We’ve even borrowed some old concepts from the days of linear editing and completely modernised them for a high performance non-linear workflow. It’s unlike anything you’ve ever seen and we can’t wait to get your feedback!

But that’s not all, there are other powerful new features across the rest of the application. The new DaVinci Neural Engine uses machine learning to enable powerful new features such as facial recognition, speed warp, auto colour balancing and shot matching, object removal and more. New adjustment clips let you apply effects and grades to clips on the timeline below. The quick export menu has been added to all pages so you can output instantly or even direct upload to YouTube and Vimeo. The new GPU accelerated scopes provide more technical monitoring options than before. Plus, parts of the rendering engine have been rewritten so Fusion is dramatically faster. There is also a major update for Fairlight audio post production include new immersive 3D audio, elastic wave alignment for precisely syncing dialog replacement with video, new bus tracks, loudness meters, a foley sampler and much more! DaVinci Resolve 16 is a massive release with hundreds of features customers have asked for!

When you need to work fast and you’re on a tight deadline, you need to use the cut page. Designed specifically for editors working on commercials, news and other short form, quick turn around projects, the cut page is all about speed. It’s an alternate edit page with a streamlined interface and revolutionary new tools that will help you work faster than ever. The cut page lets you import, edit, trim, add transitions, titles, automatically match colour, mix audio and more. Whether you’re delivering for broadcast or for YouTube, the cut page has everything you need to get the job done, all in one place!

Editing is about storytelling, creating a flow, and capturing the essence and emotion of a scene through the art of the cut. You need to cull through thousands of clips, find the perfect shots and create a seamless edit that propels the story forward. DaVinci Resolve is the world’s most advanced professional editing software. It’s both familiar and uniquely innovative, giving you the precision tools and performance you need to craft the perfect story!

Mood and feeling are dramatically affected by changes in colour. DaVinci Resolve goes far beyond basic colour “correction” and provides a world-class set of creative grading tools that let you manipulate light and colour in breathtaking ways that complement and help tell the story. As part of the creative team, colourists need to be able to quickly define “looks” for the scene and have real-time tools that help them turn raw images into beautiful expressions of cinematic artistry.

Audio is no longer an afterthought in post production! Sound elevates the emotional impact of the picture with stirring scores, clear dialog and incredible effects that make us feel like we’re part of the story. Now, for the first time ever, professional audio post production is fully integrated into a single application that gives sound editors, colourists, and video editors everything they need to seamlessly collaborate and create films and television shows that will be remembered for generations to come!

DaVinci Resolve is designed for collaboration from the ground up. Each artist gets a page with the dedicated tools and interfaces they need to get their specific job done. All of the work is tied together and managed by a powerful database, universal timeline and advanced image and sound processing engines. This makes it possible for editors, colourists, VFX artists, animators and sound engineers to work together simultaneously. With DaVinci Resolve, you no longer have to wait for the editor to lock picture before colour, effects and sound work can begin. Best of all, you no longer have to deal with importing and exporting files, translating projects, losing work, or conforming and managing changes. DaVinci Resolve is the only application in the world that lets everyone work together in parallel on the same project at the same time!

The new DaVinci Neural Engine uses state of the art deep neural networks and learning, along with artificial intelligence to power new features such as speed warp motion estimation for re-timing, super scale for up-scaling footage, auto colour and colour matching, facial recognition and more! The DaVinci Neural Engine is entirely cross-platform and uses the latest GPU innovations for AI and deep learning to provide unparalleled performance and quality. The DaVinci Neural Engine provides simple tools to solve complex, repetitive and time consuming problems. For example, it enables facial recognition to automatically sort and organise clips into bins based on people in the shot! 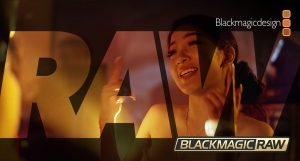 Blackmagic RAW is a revolutionary new and very modern codec that’s easier to use and much better quality than popular video formats, but with all the benefits of RAW recording. Featuring multiple new technologies, such as a new advanced de-mosaic algorithm, Blackmagic RAW gives you visually lossless images that are ideal for high resolution, high frame rate and high dynamic range workflows. Incredible image quality, extensive metadata support and highly optimised GPU and CPU accelerated processing make Blackmagic RAW the world’s first codec that can be used for acquisition, post production and finishing. Blackmagic RAW is a totally new design, plus it’s cross platform, freely available and includes a developer SDK so anyone can add support for Blackmagic RAW to their own software. LEARN MORE

In the video above, Grant Petty gives some great insight into the design and purpose behind Blackmagic RAW, but to really understand what it can do for you, download the RAW files available on the site, check out the Mac OS X player and update your DaVinci software to the latest release to start working with it TODAY! If you are game, the latest Camera Update is also now available for URSA Mini Pro and Pocket Cinema Camera 4K.

The free version of DaVinci Resolve has all of the professional editing, legendary colour correction and Fairlight audio tools you need for SD, HD and Ultra HD work at up to 60 frames per second. DaVinci Resolve Studio adds support for 4K and higher, along with frame rates up to 120 fps. It also includes dozens of additional image processing features and filters that are not in the free version. This includes film grain, temporal and spatial noise reduction, amazing new face enhancement tools, lens flares, lens distortion correction, optical quality blur and mist effects, deflicker, dust busting, warping and much more!

No Monthly Cloud Licensing – Own for half the cost of a cloud subscription!

Unlike cloud based software, DaVinci Resolve Studio does not require a connection to the internet and there are no monthly subscription fees. Now you can get DaVinci Resolve Studio for only A$419, which is 50% less than the cost of popular cloud subscriptions. Plus, you get full nonlinear editing, advanced colour correction, Fusion effects and motion graphics, and Fairlight audio tools, all included in the one easy to buy solution. It’s like getting 4 high end professional applications for the cost of one!

Get More About What’s New From Blackmagic:

DaVinci Resolve has been used on more feature films and television shows than any other grading system! You get the industry’s most powerful primary and secondary correction tools, advanced curve editor, tracking and stabilisation, noise reduction and grain tools, ResolveFX and more.

With Fairlight audio built in, you get a complete digital audio workstation with professional mixer, automation, metering, monitoring, sample level editing, new ADR tools, a sound library database, native audio plug-ins and more! You can even mix down and master to multiple formats, including 3D audio space formats such as 5.1, 7.1 and even 22.2!

DaVinci Resolve makes importing, syncing and organising footage fast! Whether you’re going out to the web, tape, or theatrical distribution, DaVinci Resolve features everything you need to deliver projects in virtually any format! You’ll be able to get to work quickly and output files fast, so you’ll never miss a deadline!

DaVinci Resolve completely redefines post production workflows! Assistant editors can prepare footage while editors cut the picture, colourists grade the shots, effects artists work on VFX, and sound editors mix and finish audio, all in the same project at the same time! You no longer have to waste time conforming and you no longer have to wait for a locked edit before starting colour and audio work! That means picture editors, visual effects artists, colourists, and sound editors can now work in parallel, leaving more time for everyone to be creative!

New High Performance Playback Engine – Fly through edits and colour correction with up to 10x the performance!

DaVinci Resolve features an incredible new video playback engine with CPU and GPU optimisations, lower latency, faster UI refresh, support for Apple Metal, and more! These upgrades combine to make DaVinci Resolve faster and far more responsive than ever. Working on long timelines with thousands of clips is incredibly fluid and editing is even more precise. Scrubbing and playback are instant, often starting before you lift your fingers off the keyboard! Powerful acceleration for processor intensive formats, like H.264, makes it possible to edit 4K material on a laptop in real-time! Whether you’re working in HD or 4K, with ProRes, H.264 or even RAW images, DaVinci Resolve is completely responsive and fast enough to keep up with your every move!

Mac, Windows and Linux – The only post production solution that runs on all popular platforms!

DaVinci Resolve runs on all major platforms so you can use it at home or in a post facility on a Mac, at a broadcast facility running Windows, or a VFX studio on Linux. This gives you the freedom to use the platform of your choice, making it easy to integrate with your existing systems and workflows. If you’re running Red Hat or CentOS Linux, you can even build your own workstation using low cost motherboards, extremely fast processors, massive amounts of RAM and up to 8 GPUs. Imagine building your own super computer for incredible real time performance!

Open and Compatible – The world’s most compatible post production solution!

With all of the different workflows and systems out there, you need a post production solution that’s compatible and open enough to handle anything! DaVinci Resolve has been designed to work with all major file formats, media types, and post production software. You can use XML, EDLs, or AAF to move projects between DaVinci Resolve, Final Cut Pro, Avid Media Composer, and Premiere Pro. Deep integration with Fusion makes it easy to send shots out for VFX work, or you can roundtrip with software such as After Effects. For audio, projects can easily be moved between DaVinci Resolve and ProTools. When you’re on a tight deadline, you can count on DaVinci Resolve to “just work!” 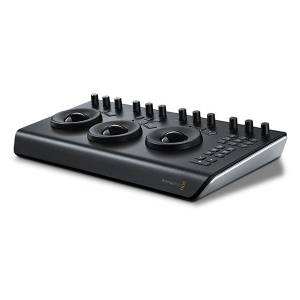 When you have a client looking over your shoulder you need to work fast. DaVinci Resolve control panels are designed to give you fluid, hands-on control over multiple parameters at the same time, allowing you to create looks that are simply impossible with a standard mouse! All controls are logically placed near your natural hand positions and are made out of the highest quality materials. You get smooth, high resolution weighted trackballs, along with precision engineered knobs and dials that feature the perfect amount of resistance so you can accurately adjust any setting. DaVinci Resolve control panels let you instinctively touch every part of the image!